Managers, Are You Making This Costly Mistake During Interviews?

Managers, Are You Making This Costly Mistake During Interviews?Camille FetterAugust 19, 2016April 6, 2020 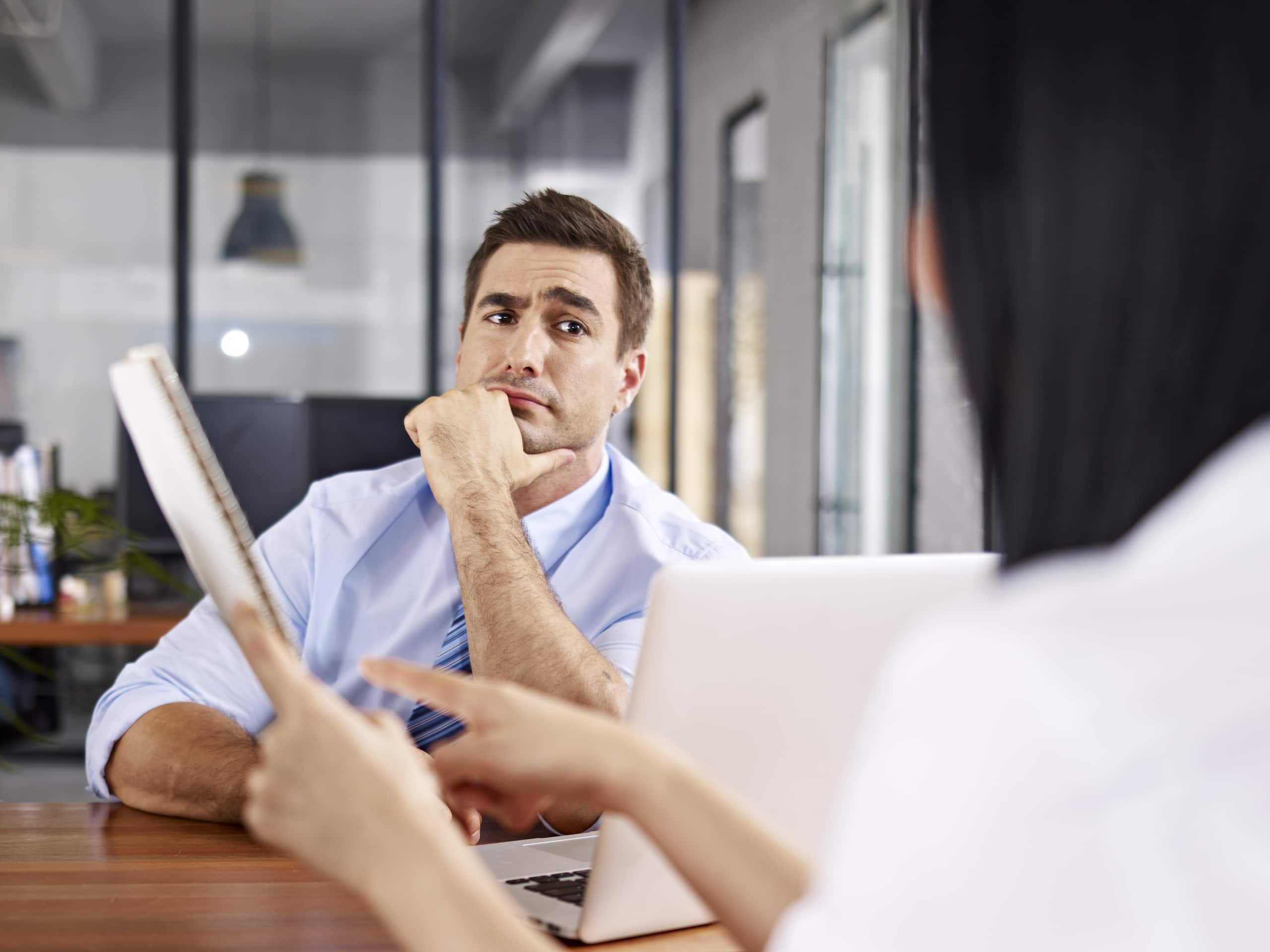 The online space is bursting with interview tips for hopeful prospective employees, but what about guidance for hiring managers?

It’s expected that every manager already knows exactly how to hold an interview and what to say and not say. I’ve learned through my work with executives at all levels that this isn’t always the case.

Many managers feel confused about the interview process (but don’t want to admit it), and end up saying things that hurt their chances of getting the best possible talent on board.

This can getverycostly, given the amount of time hiring managers invest in sourcing and evaluating talent andwasting time leaving a position open where atop performercould be increasingthecompany’s bottom line.

And listen, I get it, because I run abusinesstoo. You’re slammed all day and then 3pm rolls around and you have to do an interview. It’s not easy.

Your brain is fried and the last thing you want to worry about isan hour long meetingwithsomeone who maynot join your team at all.

So what’s the solution?

Keep it simple! By following a few guidelines, you can make sure you never ruin an opportunity to get an A-player on your team by saying the wrong thing.

These are the four most common phrases I hear hiring managers say during interviews that could be killing their chances of getting a “yes” to an offer – and wastingfinancial opportunities for the businessand time.

Instead of presenting the position as hot, you automatically categorize it as tepid in the eyes of the person sitting across from you.

You know how people say, “All you need to get a date is another date?” It’s the same with hiring.

If candidates know the position they’re interviewing for is desired by other people, it makes ‘em want it even more.

If you hint that it’snothighly desired, they’re likely to go running for the hills.

2. “The last two people in this role haven’t worked out.”

This might intimidate the interviewee or make them feel like it’s not a good company to workfor.

Hires don’t work out either because they’re not performing well or because the company isn’t providing the environment, benefits, and/or compensation they need.

That’s a simplification, of course, but the point is that it can go either way, but neither of those is desirable.

You don’t want your potential new hire to be intimidated by the position or get the idea your company isn’t a great place to work, so avoid this phrase altogether.

It’s good to be honest, but you don’t want to say something like this during an interview.

Every seasoned candidate already knows that there are hundreds of different management styles and of course you’re not going to mesh well with everyone.

This is an expected potential challenge whenever someone starts a new role, and you don’t need to lead them to believe that you’re extra difficult.

4. “Surprisingly, we haven’t had a lot of interest in this position.”

For the top candidates, this will be a red flag that the position and/or company isn’t that great.

Trust that the person in front of you is there because they want the specific role you have available, and it doesn’t matter if you haven’t had a lot of interest. Skip sharing that!

By avoiding these foot-in- mouth moments, you’ll bump up your chances of hiring your #1 choice by at least 50%.

Have you ever let one of these phrases – or something similar – slip out?

Has it lead to a turndown from a candidate you really wanted to bring on board?

Share your story with me, we wouldlove to hear from you!

What, in the post-pandemic world, sets those who manage, apart from those who lead? The...

It’s one thing to shop for family members and friends, it’s a whole different challenge...

The Greatest Gift to Give and Recieve: GratitudeCamille FetterNovember 19, 2021November 22, 2021

November 19, 2021November 22, 2021|BY Camille FetterThe Greatest Gift to Give and Recieve: Gratitude

This website uses cookies to improve your experience while you navigate through the website. Out of these, the cookies that are categorized as necessary are stored on your browser as they are essential for the working of basic functionalities of the website. We also use third-party cookies that help us analyze and understand how you use this website. These cookies will be stored in your browser only with your consent. You also have the option to opt-out of these cookies. But opting out of some of these cookies may affect your browsing experience.
Necessary Always Enabled
Necessary cookies are absolutely essential for the website to function properly. These cookies ensure basic functionalities and security features of the website, anonymously.
Functional
Functional cookies help to perform certain functionalities like sharing the content of the website on social media platforms, collect feedbacks, and other third-party features.
Performance
Performance cookies are used to understand and analyze the key performance indexes of the website which helps in delivering a better user experience for the visitors.
Analytics
Analytical cookies are used to understand how visitors interact with the website. These cookies help provide information on metrics the number of visitors, bounce rate, traffic source, etc.
Advertisement
Advertisement cookies are used to provide visitors with relevant ads and marketing campaigns. These cookies track visitors across websites and collect information to provide customized ads.
Others
Other uncategorized cookies are those that are being analyzed and have not been classified into a category as yet.
SAVE & ACCEPT